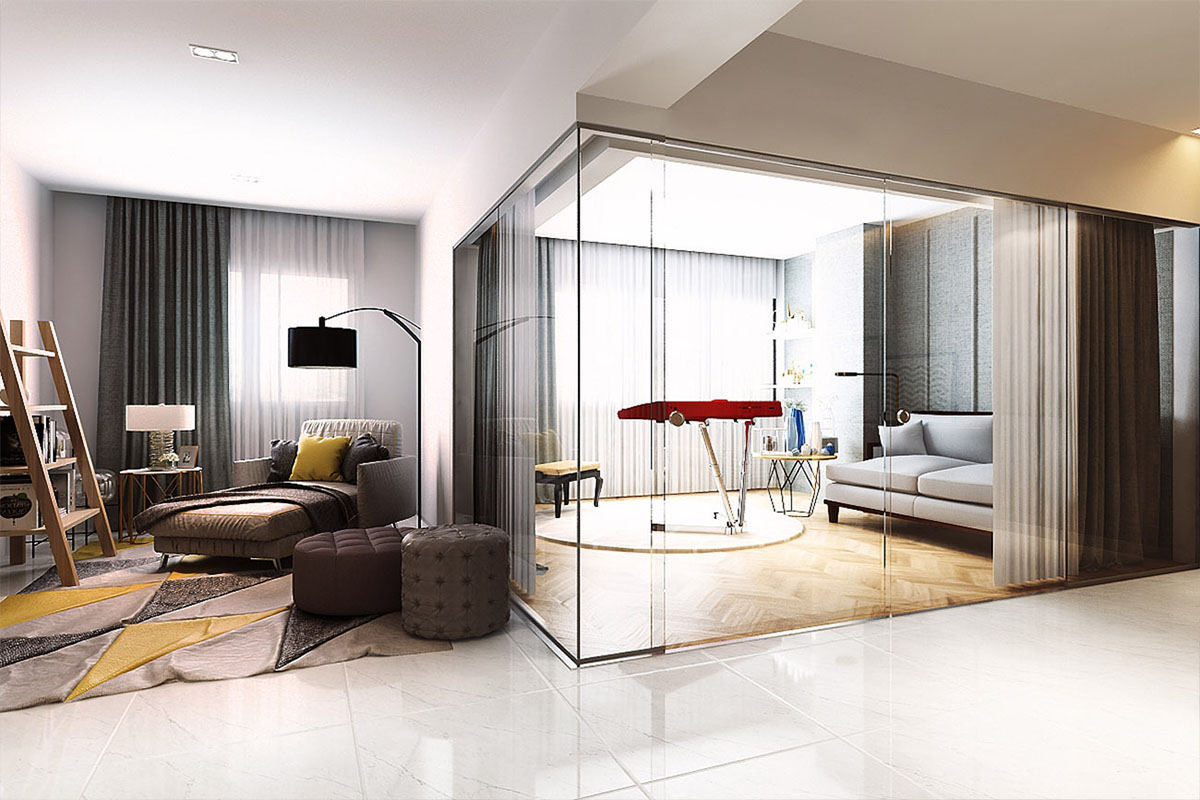 This week’s House Hack is a real job, and it’s set in Toa Payoh. It’s a real doozy. Or it will be when it’s done. It’s an actual work in progress where the final plans have finally been set in place. All there is, is to get the construction started. Without further ado, let’s get to know the couple behind this apartment.

The duo behind this is an eccentric newlywed pair in their 30s. For privacy’s sake, their names shall remain confidential, but let’s call them Danny and Esther.

The husband’s a singing coach and the missus is in the creative line. They’re regular film and Jamie Olivers fanatics so a kitchen and a film space is a must.

Kids aren’t on their minds, therefore, anything goes. This would be one of the most important details of this design project.

The couple likes walk-in wardrobes and there are good reasons for it too (1) They save floor space; one less door is needed. (2) It protects clothing. The extra airflow prevents mould, mildew, and mustiness from settling into them. (3) It would also serve as a dressing room and laundry sorting space.

Danny coaches singers from home so, of course, he needs a studio. And it’s got to be posh; celebrities are some of his clients!

Danny and Esther have awards to their names so they would like some display cabinets for their achievements and other accoutrements.

Fans of open spaces, the couple gave the go-ahead to demolish walls to make room around the apartment. 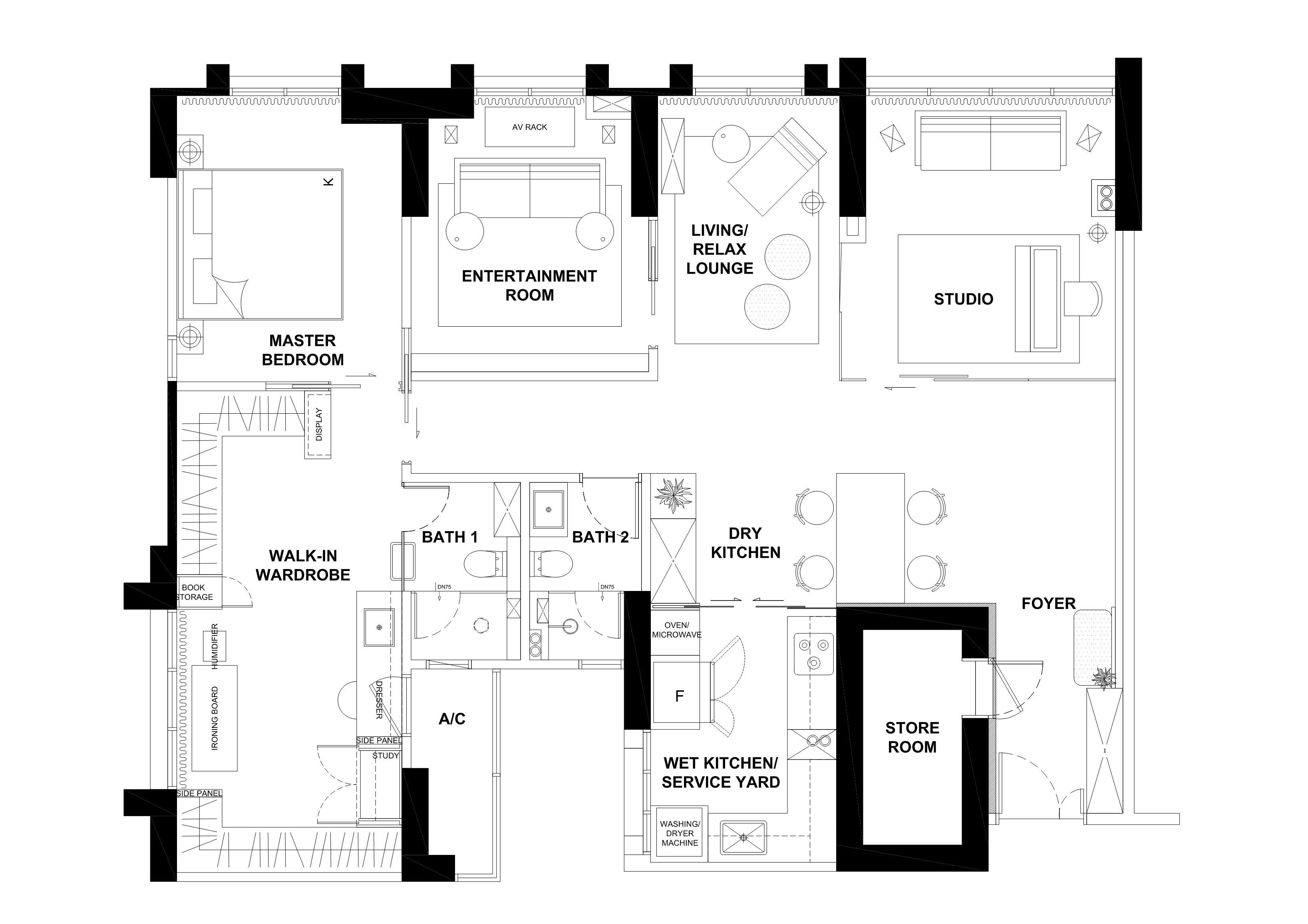 The public and private quarters have been designed to occupy discrete parts of the home, the front and the back respectively, just as you would with a restaurant. This is an important design aspect that removes the usual trappings of a home, such as the cliched living room TV console and sofa, and replaces it with a professional environment that will be the first and only thing that Danny’s students will see. The designers even went as far as switching out the dining table with a bar counter to give the public portion of the home an intentional ‘commercial’ look.

Danny was quite specific about this: there HAS to be a studio with all the trappings that one should expect of a singing studio.

With such a quirky couple, the designer pulled out all the stops; the entire living room and balcony got converted into Danny’s studio. No need for TV space (it would go elsewhere). Glass floor-to-ceiling walls separate the studio from the rest of the home with curtains and soft wall panels for sound insulation.

Danny and Esther didn’t exactly ask for an entertainment room. That said, they did mention that they really like films.

Since the original living room space was repurposed, you’d think they’d knock down the walls to create a new one. However, the designer suggested something bold: turn Bedroom 3 into an entertainment room/micro theatre. Its entrance would be a living lounge (previously a study) that’s sandwiched between the entertainment room and studio. 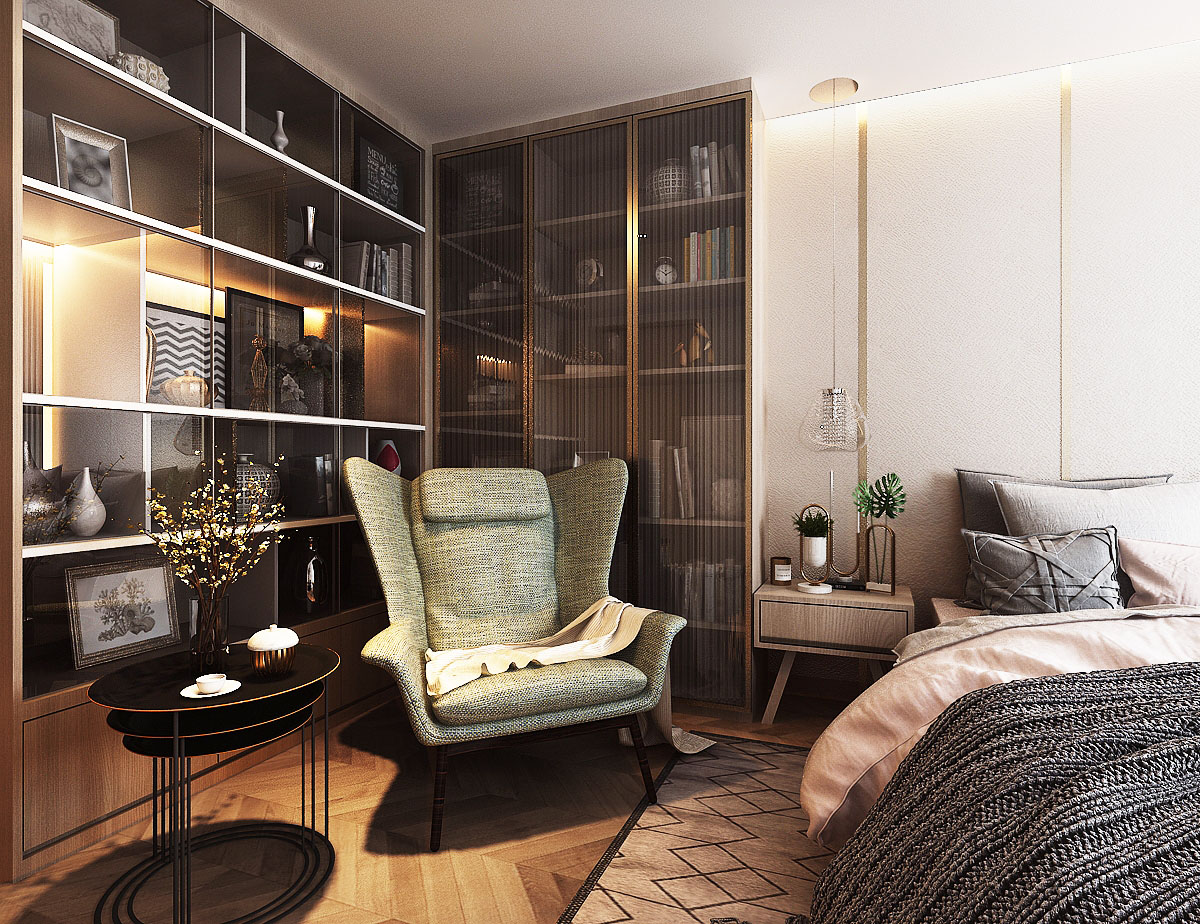 Remember their request for display shelves? The two wanted lots and lots of them here. Shelves for awards, shelves for decor, and shelves for books. And they had to look good, naturally.

They also wanted a walk-in wardrobe for their master bedroom reminiscent of their prior experience with them at hotels.

The designer knocked down the walls between the Master Bedroom and Bedroom 2 to create a massive bedroom. Walking in from the corridor, the couple will see their bedroom. The walk-in wardrobe is literally that: there’s no door between the two spaces. The only thing that delineates the two areas are the L-shaped cabinets in both rooms.

The cabinets in the walk-in wardrobe cover both corners of the room (guess who has the bigger one). The window space has been designated the ironing/sorting area. Might as well have a good view while you’re working, right?

As the area also serves as a dressing room. Killing two birds with one stone, the sink was moved from the bathroom next to the dresser which really helps to elevate the utility of this room and increase the floorspace in the bathroom.

A storage cabinet was added to the bathroom for bathroom essentials. 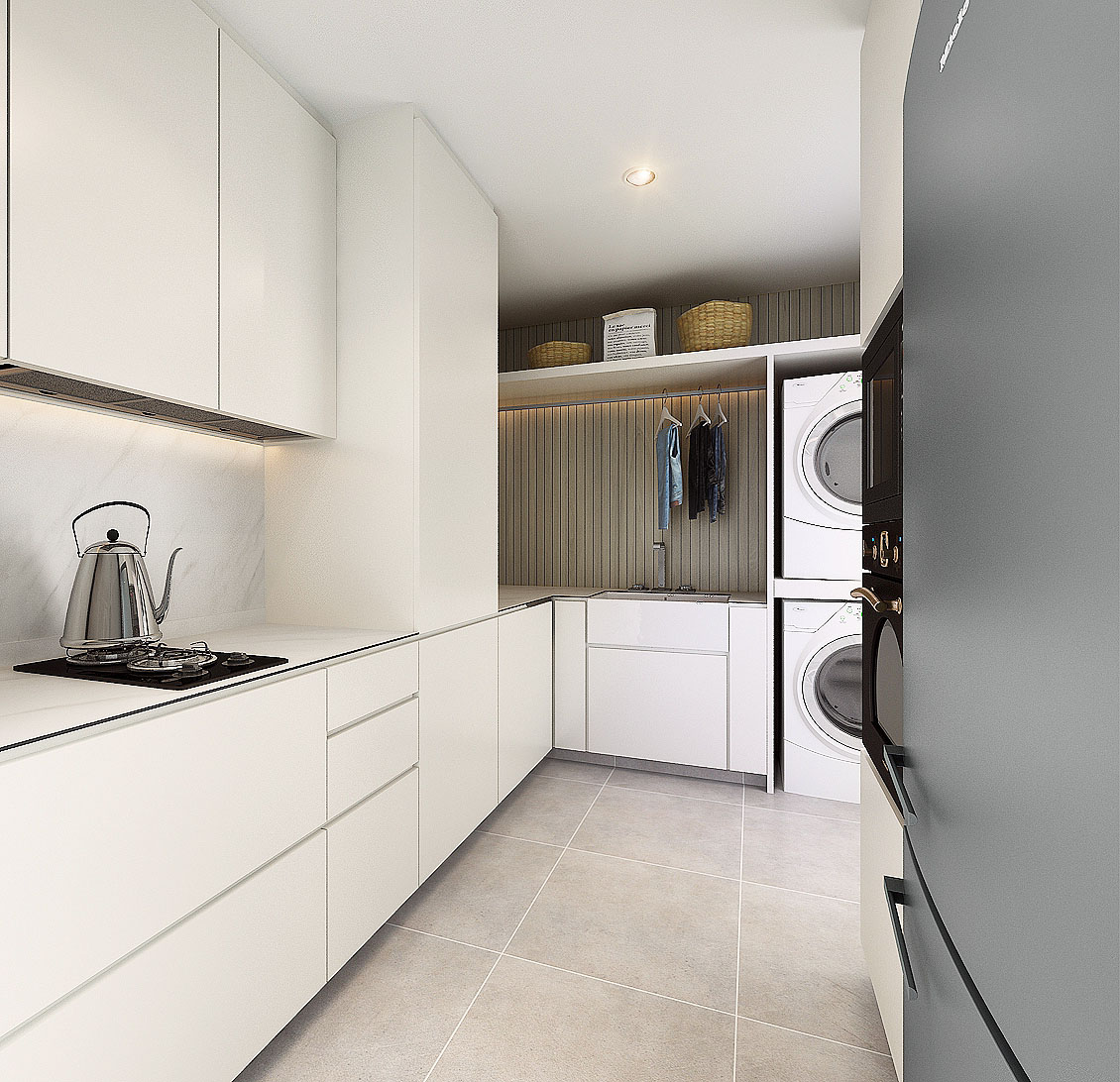 Danny and Esther love to cook and would love to have a functional yet beautiful space to create, cook, and serve meals.

The kitchen was extended out into the service balcony to maximize the space used, allowing it to be divided into a dry kitchen and a wet kitchen that doubles up as a service yard. Isolating the wet kitchen ensures that aromas and grease from cooking don’t waft into the rest of the home, especially when Danny is coaching in his studio. 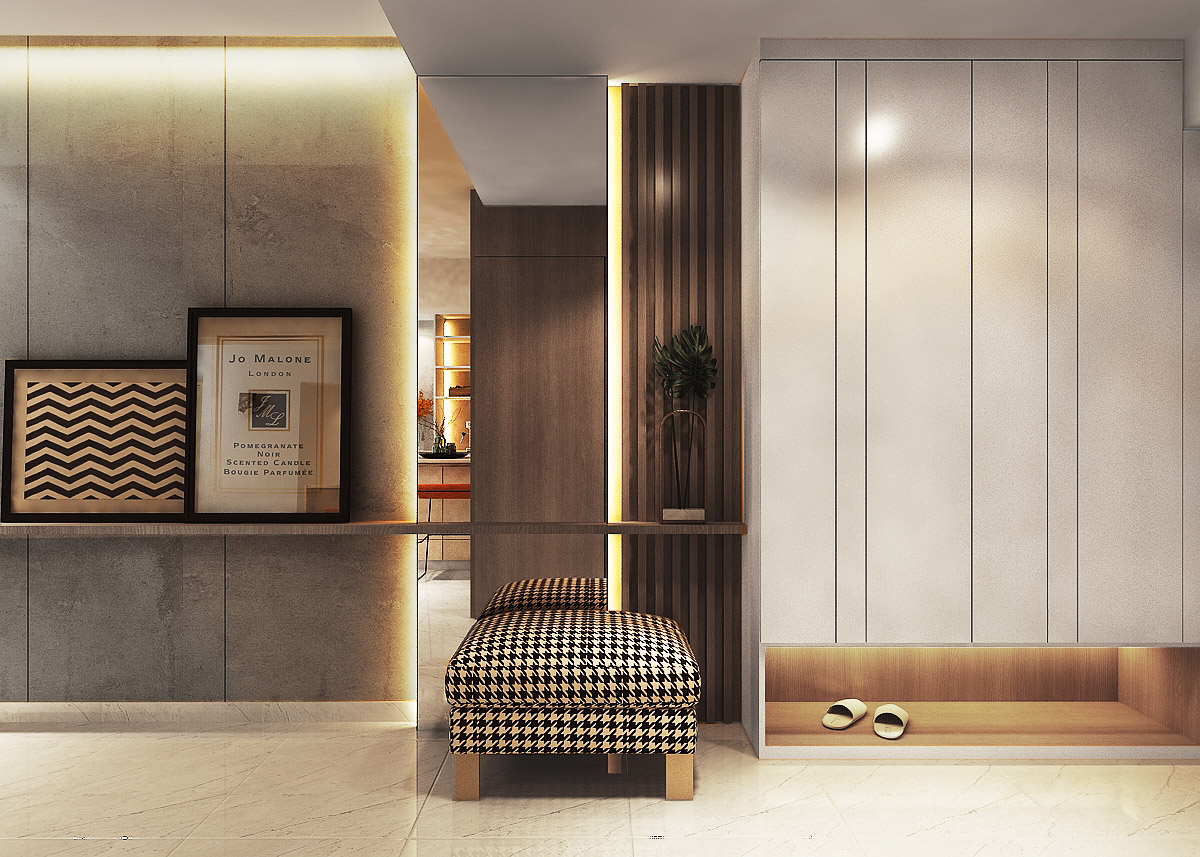 The foyer features long vertical lines that accentuates the height of the apartment using panels, large tiles, and fluted wood panels. It’s a common theme you’ll find throughout as one walks through it. To create a bigger sense of space, there is also a mirror here too. 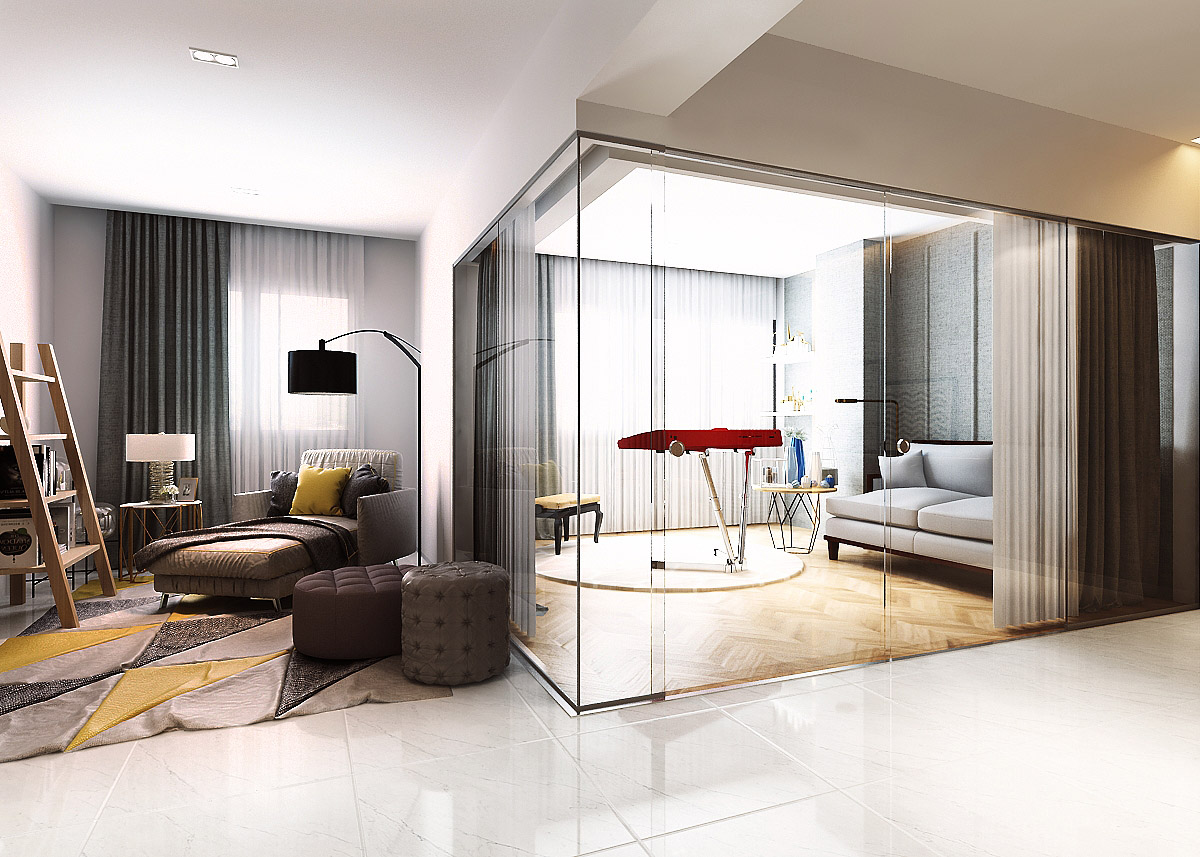 The Studio and Living Lounge

This is the main feature of the home: Danny’s studio. Unlike the rest of the home, it features a drop ceiling to create a more intimate space between coach and student. Soft wall paneling and curtains that can be drawn closed over the floor-to-ceiling glass walls provide the sound dampening required of such studios.

The living lounge serves as the entrance to the entertainment room. 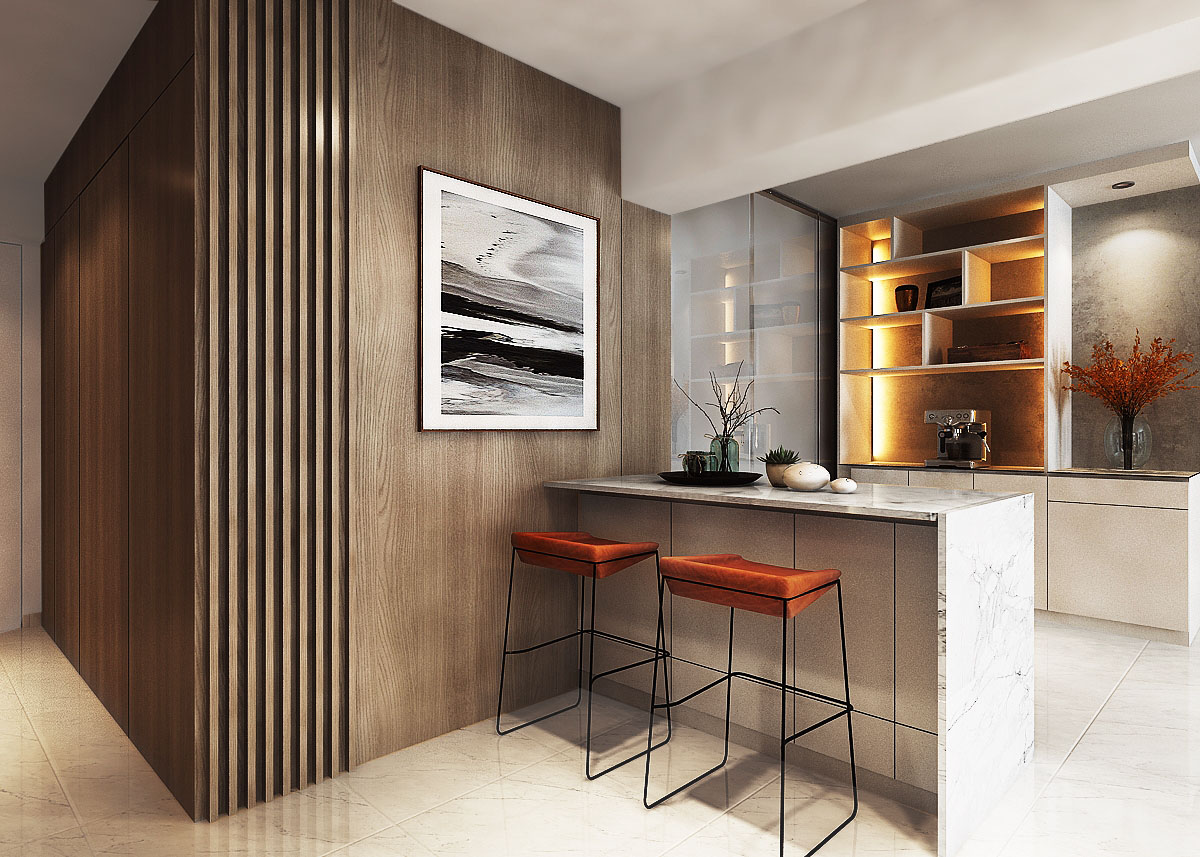 Once again, in the dry kitchen, you can see fluted wall panels to accentuate height. The main showpiece here is the marble waterfall counter, delineating the kitchen from the foyer. Lit shelves and coffee machine station gives this area a warm and welcome feel.

The dry kitchen is minimalistic and spacious, allowing for easy food preparation and clean-up. 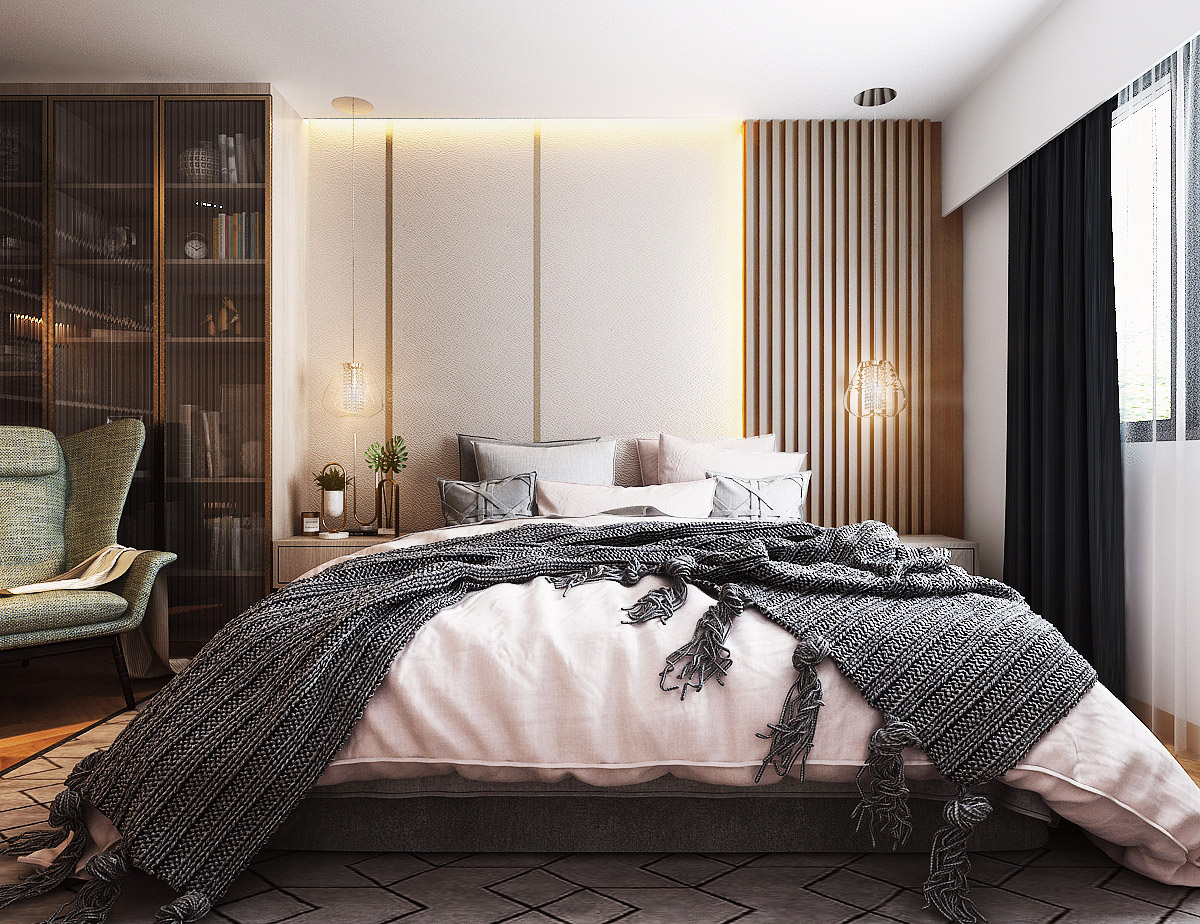 As one walks into the bedroom, there’s a sense of grandness to it. Vertical gold trimmings, corrugated glass, and the hanging lamps accentuates the height of the room. 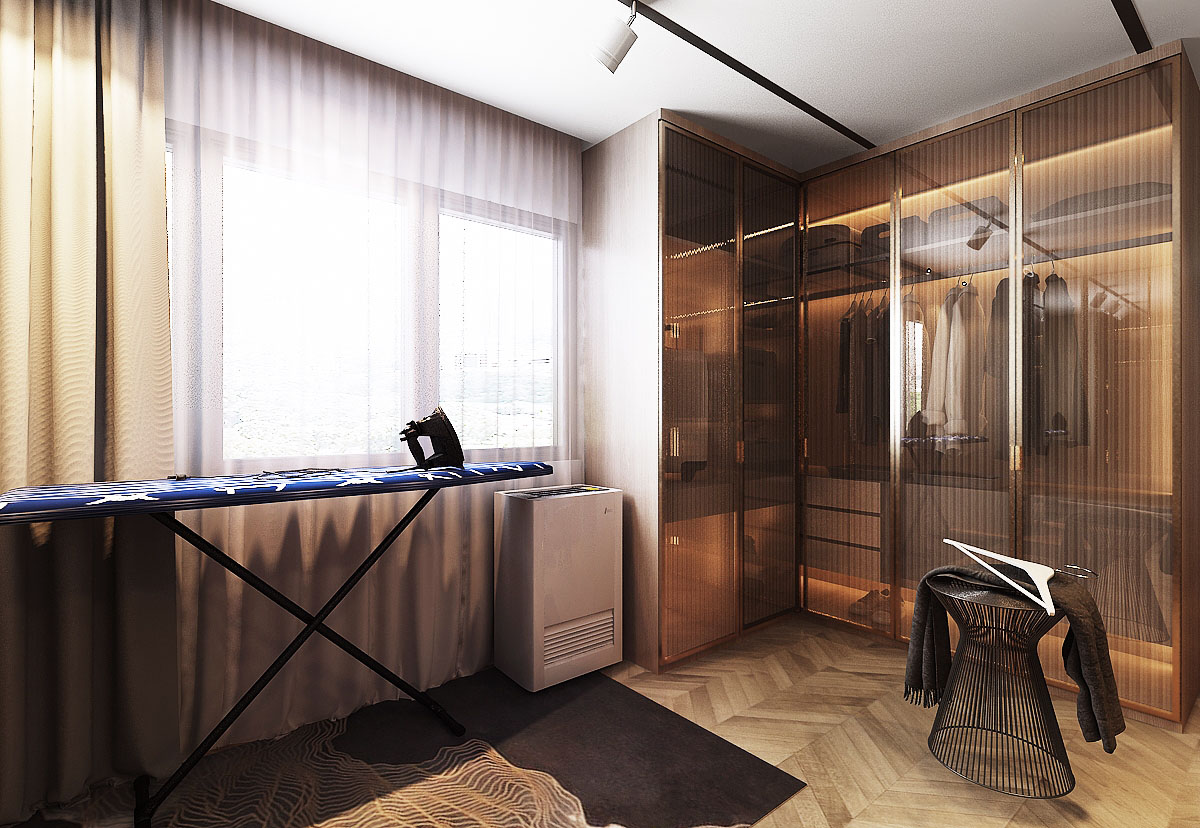 Connected to the bedroom is the walk-in wardrobe. Cabinets line both corners of the room, one of which is covered by corrugated glass. Like everything else in the house, the glass gives the room its height. In front of the window, room was given to allow the couple to iron their clothing. 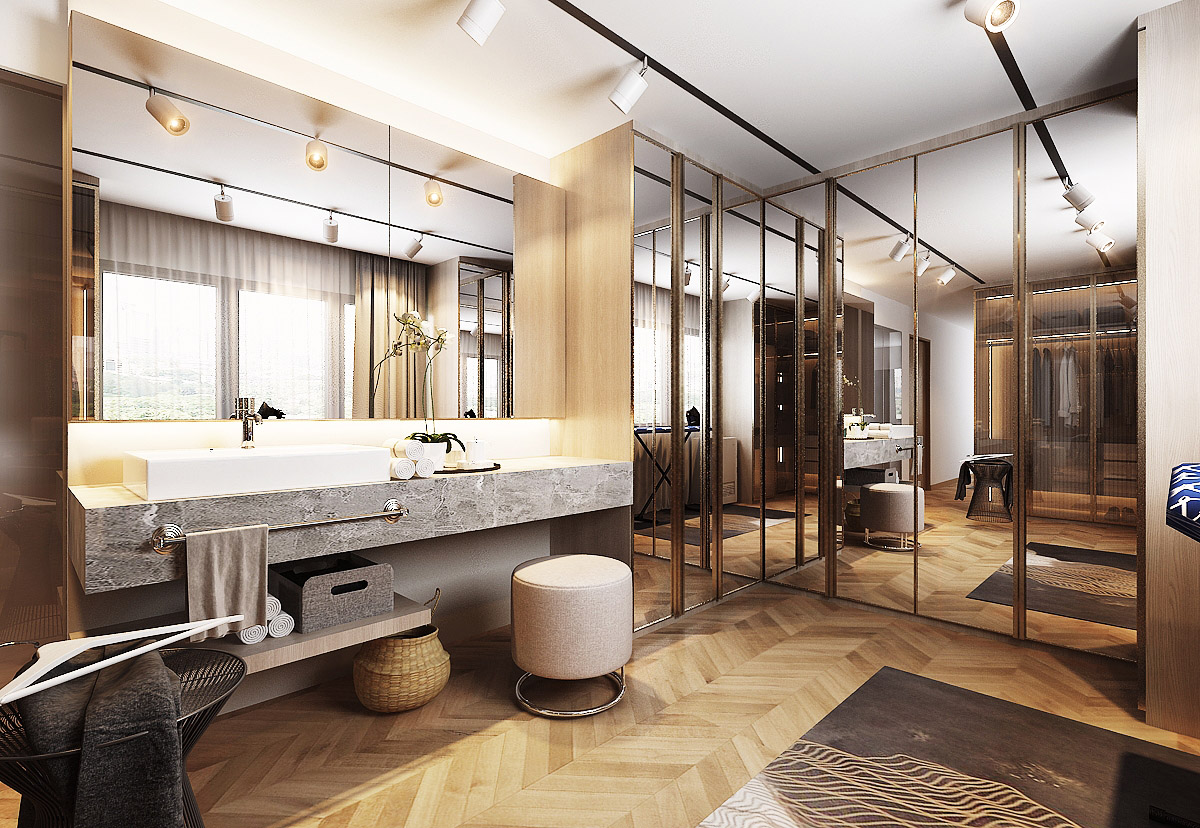 If this space didn’t already seem large enough, mirrors on the opposite cabinets and the dressing area makes this wardrobe truly palatial. The sink which was brought out of the bathroom now lives in this space like they do in hotels. A quartz countertop adds to the classiness of the room.

A space of their own

If you’re thinking to yourself, this place is crazy large, you’d be right – it kind of is. However, it’s possible because of one reason: they plan to have no kids. Keeping that in mind, all but one bedroom became unnecessary and were free to be converted for other purposes. In this case, an entertainment room and a walk-in wardrobe. 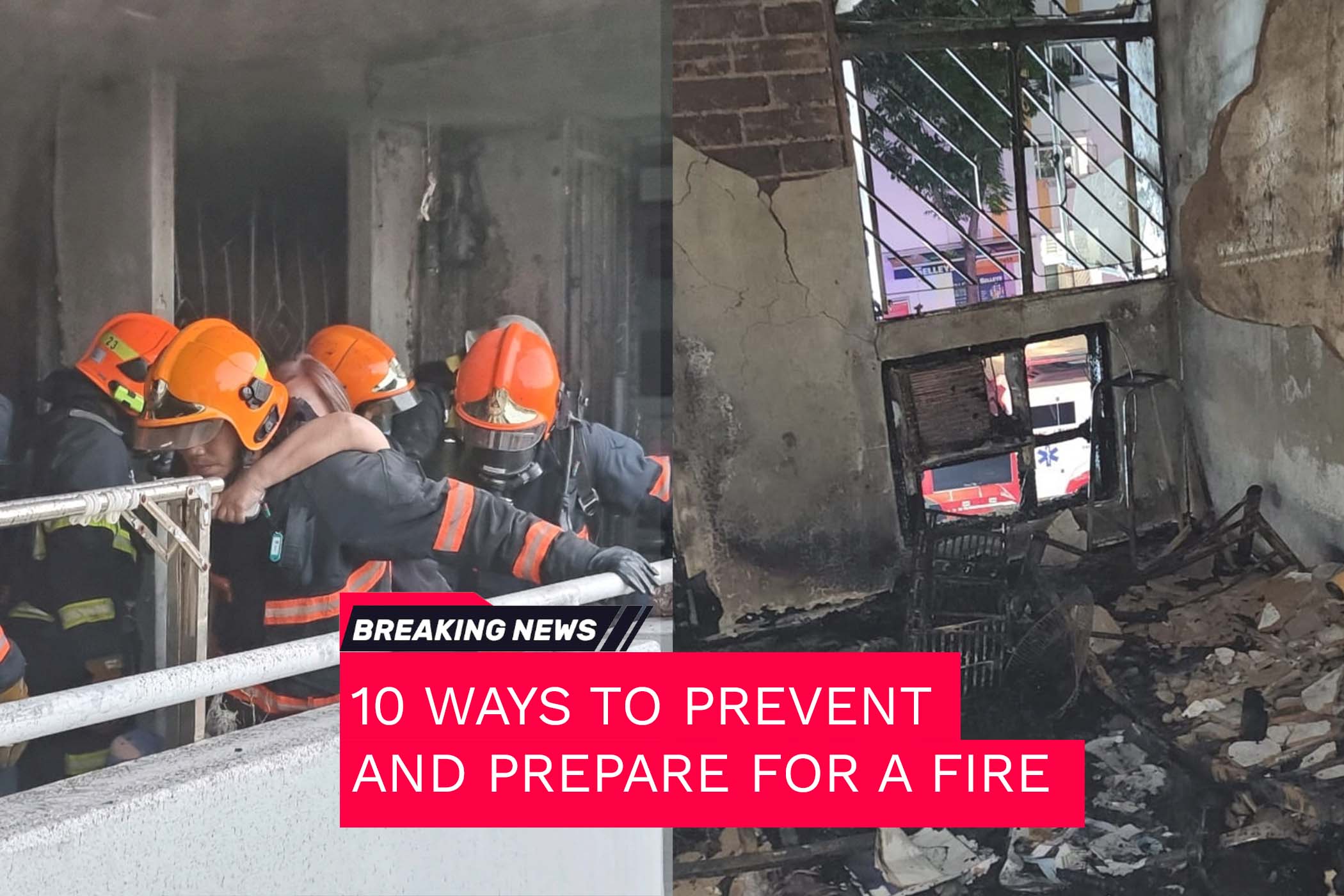 10 Ways to Prevent and Prepare for a Fire

It takes only 30 seconds for a fire at home to become life-threatening. The tragic fires at Ang Mo Kio, Bedok North, Seletar and Telok Blangah should be enough to give you pause. 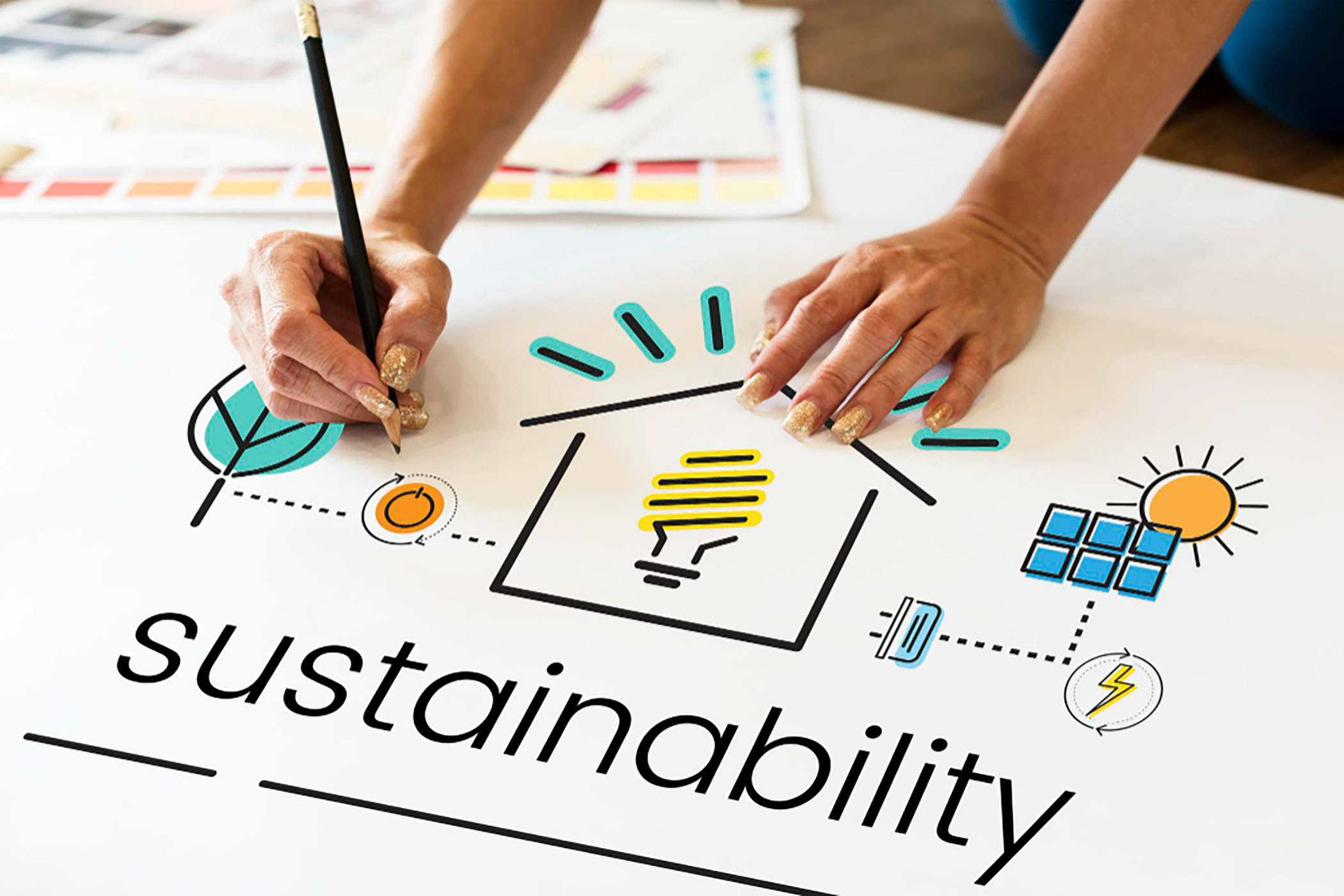 What Can Sustainable Home Design Do For You?

Singaporeans love their aircons. It’s our natural go-to solution to beat the tropical heat of our sunny island. Many of us grew up with very thrifty parents, and true to their nagging, 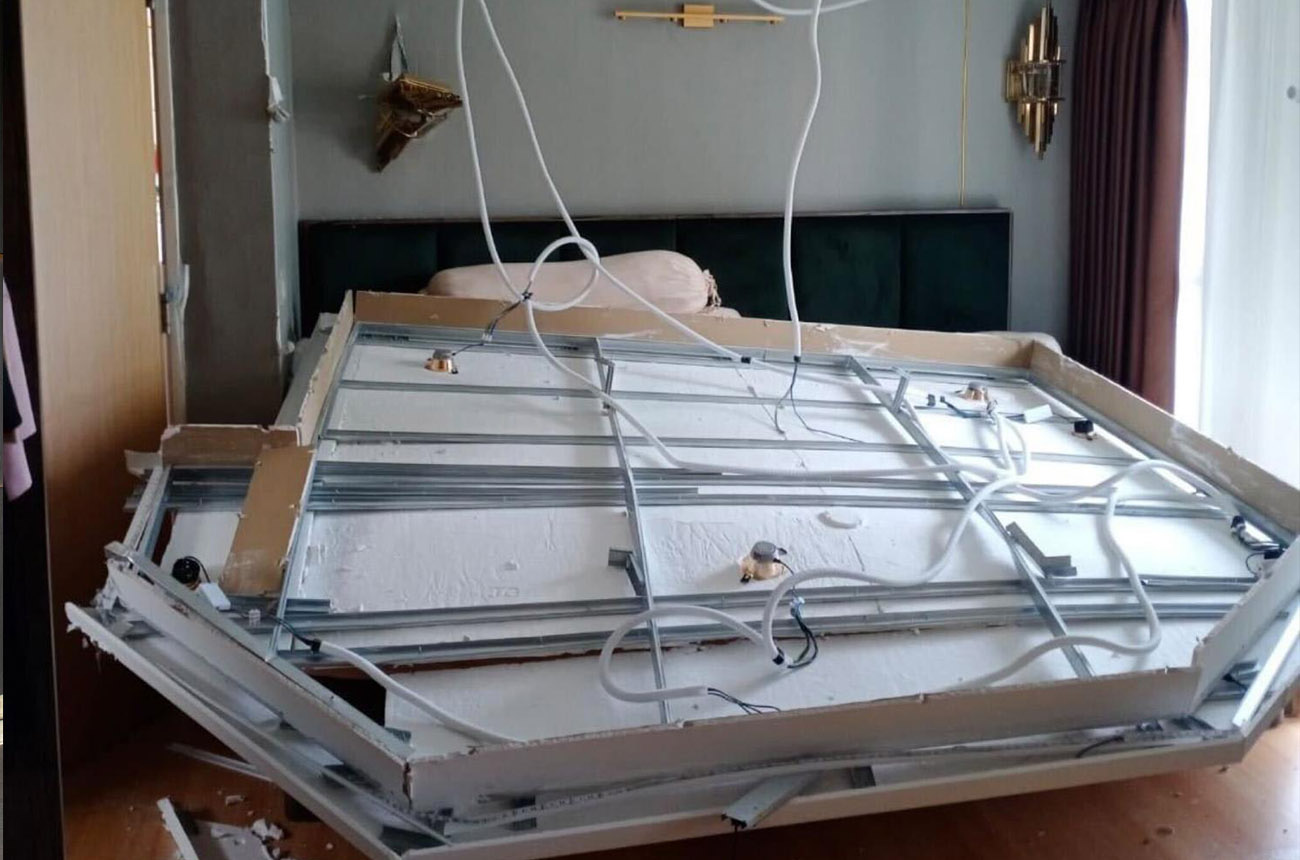 Last Thursday marks just one more, among many other cases in the past six months, of spontaneous ceiling collapses. Enough to make you think, “Is mine next?” The good news is that these things don’t just happen